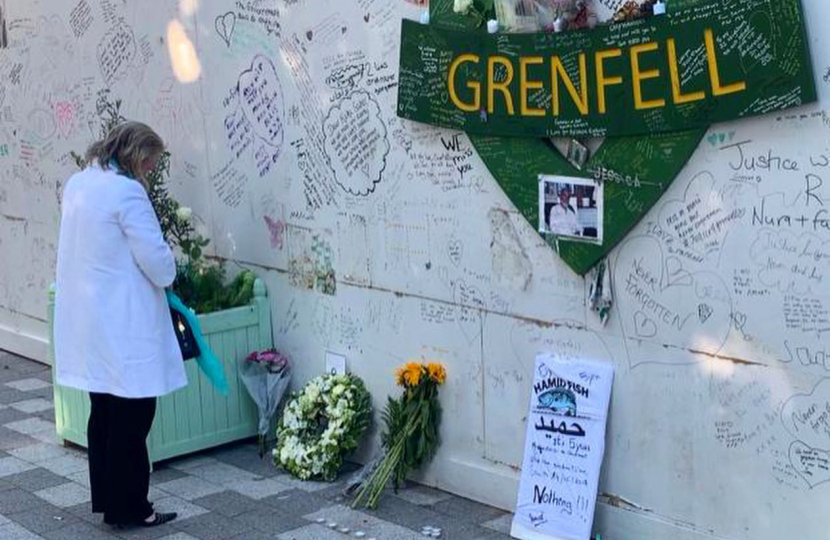 Tuesday marked the Fifth Anniversary of the Grenfell Tower tragedy.  Felicity Buchan, the MP for Kensington, has this week being remembering and paying tribute to the bereaved, survivors, residents and wider community of Kensington. Before attending the Westminster Abbey memorial service on Tuesday, Felicity visited Grenfell Tower and laid a wreath of green and white flowers. She visited the Al Manaar mosque at the weekend for a reflective event to mark the anniversary.

Felicity has spoken in two debates on the subject in the past week. Last Thursday, there was a Debate on Social Housing and Building Safety, which many Grenfell families attended in the gallery of the House of Commons. She said that all recommendations of the Grenfell Inquiry should be implemented and this needed to happen at pace. She welcomed the Social Housing Bill which will strengthen the voices of tenants in social housing. You can watch her speech here. In today's Backbench Debate on the Fifth Anniversary of the Grenfell Fire, she talked about how humbled she has been to meet many of the bereaved and survivors; she vowed to work tirelessly so that a tragedy of this kind cannot happen again. She said that progress had been made with the passing of the landmark Building Safety Act and Fire Safety Act but there was more to be done and this needed to happen quickly. You can watch her speech here.

"The lasting legacy of Grenfell must be that everyone has a right to live safely in their homes and every community has a right for their voices to be heard.

On Tuesday, I laid a wreath at Grenfell Tower, on the 5th Year Anniversary of the Grenfell Tragedy where 72 men, women and children died so horrifically and needlessly.

All my thoughts are with the Bereaved, Survivors and Residents who have borne so much with so much dignity.

You will never be forgotten."

Felicity Buchan has celebrated the £546,031.00 that has been awarded to community projects in Kensington by the National Lottery Community Fund since March.